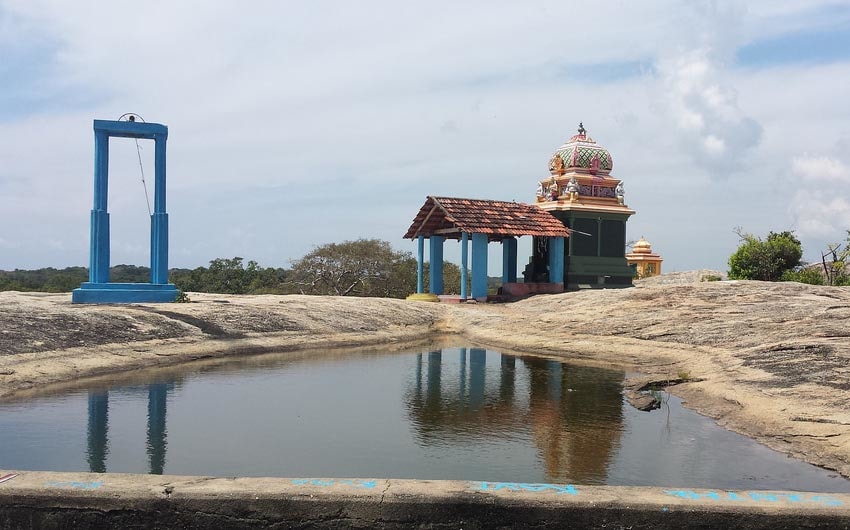 The Sylvan Shrine at Ukantamalai Rock Devoted To Lord Murugan

To: Editor,
The Daily Mirror,
Colombo

I have read with interest the story published in your esteemed journal The Daily Mirrorť of the 9th October, 2004, under the caption, Okanda Devalaya Named Murugan Kovilť and please permit me a few lines in your valuable journal to respond to the utterly false allegations the Hon. Minister of Cultural Affairs, had made in Parliament.

According to The Mirrorť report, the Minister of Cultural Affairs had made a Statement in Parliament, alleging that the Okanda Devalaya had been used during the war period as a Kovil by the LTTE. This statement of the Minister is wrong, utterly false and an irresponsible statement, since there was only one Devalaya at a place known as Ukantaimalai, or, Okanda and, that is the Hindu Devalaya devoted to Lord Murugan. It had existed there for many centuries, nay, for millennia. The LTTE had no hand either in the worship or management or organization of the Temple. And the accusations of the Minister as reported in the Mirror, are both malicious and mischievous, intended to mislead the Country and its People, with bad taste and ulterior motives. It is a nothing but a cock and bull story. I am yet to see the cadres of the LTTE at worship, and we know that the LTTEers are no idle idol worshippers.

It is more interesting to know that many English and Sinhala news papers have carried full page stories about the Sylvan Temple called the ĹšrÄ« Murugan Alayam at Ukantamalai. In fact, the Mirror had an interesting story about the Murugan Aalyam at Okanda sometime ago. The story began with the following sentence:

Of all the places of Hindu worship in the Ampara District, the sylvan shrine called Ukantamalai Murugan Kovil devoted to the Lord of Kataragama, nestling in the womb of thick jungle and rocks represent a manifestation of Divine Power and sublimity, and, stands unique as a popular pilgrims' resort, much hallowed as a center for penance and prayer.ť

Surely, if the Minister was genuine, he cannot have made such a blemish and irresponsible statement in Parliament.

Ministers are expected to be responsible. The statement of the Minister made in Parliament as reported in The Mirror, is utterly false and misleading. It is most regrettable that the Government has sought to make an absolutely false claim to an ancient Hindu Temple, held in great veneration as a place of sacred worship, not only to Hindus but also to other faiths.

When we examine the meaning of the word Devalya and Kovil, we are told by philologists that both words have their origin to the Tamil language The word Deva is Tamil and denote Divinity, the God. Alaya is the abode of God, and is a Tamil word. The two words, Devalaya and Kovil refer to a place to worship the God. . Therefore, as the name suggests the Devalaya at Ukantamalai, or Okanda is the Temple of the Hindu God,-Lord Murugan, the presiding deity at Kataragama. The Temple at Ukantamalai was and is being worshipped not only by the civilians but also by the Politicians, Members of the Armed Forces, and includes the Police, the Police STF, and the Army who make regular visits at all times of the year. I am a witness to the visits of several Commandants of the STF, the DIGs of the Police and Brigadiers of the Army. Therefore, the Temple at Ukantamalai is not new as alleged, but a very ancient place of Hindu worship. It is here, where the members of the Armed Forces have prayed for victory over their foes, for Peace for the Country and safety of their lives. Their prayers were granted, I know.

A Member of Parliament (JHU) had reportedly alleged that the LTTE had renamed the Devale as Murugan Kovil. It is a reflection of the sheer ignorance of that Honourable Member of the august Assembly. Has not Lord Buddha said, Ignorance of truth is the antecedent of life.ť Let us forgive him.

Lord Buddha in his First Sermon (Setting in motion the Wheel of Law) had declared the Noble Eightfold Path, which among others include, Right Thought, Right Speech, and, Right Action. It is most distressing to find that those who claim to be belonging to the noble Order engaging themselves in activities contrary to Buddhist tenets. It is a sure sign of departure from the Path, free of chicanery, deceit, fraud and lying. Does not the Dhammapada (Chapter 13) exhort the adherents to the doctrine to keep away from false beliefs, and, lowly actions? They who aught to be lamps, holding fast to the truth, should have their actions noble and avoid the transgressions of the moral principles. They have erred. They are making false claims. If slander and abuse are sins of speech, are not those monks guilty? If the Member of the JHU make such irresponsible utterances in places like the Parliament, where can we obtain redress? All the waters of the Ganges is not sufficient to wash their sins.ť The claim to the Temple of Lord Murugan at Ukantamalai is the most dishonest claim aimed at grabbing the Temple of the Hindus.

The Ukantamalai Murugan Temple has a legendary and a deified history of its own. It is connected with the epic-famed King Ravana. The Mattakalappu Manmiyam, a book on the early history similar to Mahavamsa, records it so.

Several centuries ago, there arrived from North India a Sage called Giri to the Temple of Lord Murugan at Kataragama. He was directed by the Lord to travel to Ukantamalai and spend his time in worship. He functioned as the priest of the Temple at Ukanthamalai until the line of Kurukals from Tampattai took over from the sage Giri.

In the mid 19th century, Mudaliyar K.V. Marcandan rebuilt the Ukantamalai Murugan Temple and built a new Pilgrims' Rest that could accommodate the large number of pilgrims who arrive there. That large building was burnt down some years ago. Two devotees, Mr. Palakutty and Kulandaivel Vannakkar, both of Akkaraipattu built new pilgrims' rests, first in the year 1957 and the other in 1967, very much before the civil war broke out.

Mudaliyar Marcandan who re-built the Temple also appointed a Sinhalese called Santahamy, who fled Uva with the famous rebellion there, as the Caretaker. On Santahamy's death his son Punchi Mahataya functioned as the caretaker of the Kovil and now, after Punchi Mahataya, his son Muthu Banda is the caretaker for the last twenty-three years. The civil war began in 1983, and Muthu Banda took over as Manager, much earlier.

Therefore, the allegation is baseless, aimed at bringing discredit to the Government and themselves. The Kovil is a famous one where thousands of pilgrims flock to the temple during the festival season. I cannot but quote The Mirror, which previously said, pilgrims arriving at this shrine seem to believe that a prayer at this Shrine brings them good luck and divine intercession in times of difficultiesť

I am sure the Minister will see things in the correct perspective.